Eliminating colon cancer might sound like an unattainable goal, but don’t tell that to David Ahlquist, M.D., Mayo Clinic gastroenterologist, whose research was used by the Wisconsin company Exact Sciences to create a patient-friendly, colorectal cancer-screening test recently approved by the FDA. The test is called Cologuard.

“The goal of eradicating colorectal cancer has been almost a lifetime pursuit of mine,” says Ahlquist. “I’ve seen too many patients who had colon cancer and so many polyps. Sadly, many of these patients came in after they were symptomatic and at late stages. There was a clear gap with current screening approaches and a huge need for a better tool, one that was accurate, easy for patients to use and readily accessible. Improved early detection across the population was the most rational way to tackle this common cancer killer. This challenge inspired me and my research team.”

Cologuard could fill the gap. A large, multisite study recently published in The New England Journal of Medicine showed that Cologuard sensitivity for detecting colon cancer was 92 percent. Cologuard now provides an appealing alternative to colonoscopy that is accurate, requires no preparation or diet change and can be done from home and then mailed to a testing center.

Cologuard detects DNA alterations from cancerous and pre-cancerous cells that are “shed” into human waste, and the novel technologies developed around this biological insight represented the central innovation.

The test, which the federal Centers for Medicare and Medicaid Services says should be done every three years, is especially sensitive for those polyps at greatest risk of progressing to cancer — that is, large polyps containing “high-grade dysplasia.” Although an initial test might miss a small number of tumors and pre-cancerous polyps, Ahlquist says subsequent testing within a regular screening program should catch them. Early cancer detection can lead to cure rates exceeding 90 percent, and polyp detection can prevent cancer altogether.

If this could be done at the entire population level, it would lead to much more effective detection and allow us to seriously pursue the goal of eradicating colon cancer. “You have to think big — otherwise it’s not going to make a dent,” says Ahlquist.

With Cologuard, patients mail their stool samples in sealed containers to Exact Sciences for DNA analysis. Mayo was the first medical organization in the United States to offer the test, and others now are offering it as well.

Ahlquist says colorectal cancer is highly preventable with proper screening, because cancerous colon polyps are slow-growing. The test is recommended for adults between the ages of 50 and 80 who are at average risk for colon cancer based on their health and family history. Unfortunately, Ahlquist says, millions of adult Americans are not being screened as recommended. As a result, colorectal cancer has remained the second leading cancer killer in the U.S. 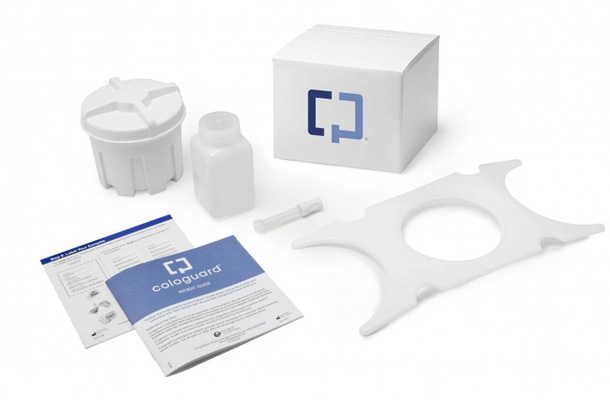 Blood is an imperfect marker

Ahlquist, who has been practicing medicine for more than 30 years, spent the first part of his career studying fecal blood. But it became apparent to him that blood is an imperfect marker for colon cancer and especially for pre-malignant polyps; many cancers and the vast majority of polyps do not bleed.

“At that point, we tried to re-imagine an approach that would be biologically more rational and meet the criteria of an ideal training test. We wanted it to be accurate for detection of early-stage cancer and the most advanced pre-cancers: the polyps that are at greatest risk for transforming to cancer.”

Ahlquist decided to look for tumor-specific markers from cells that are actually shed from the surface of cancer and the polyps in a process called exfoliation. In the early phases of his work, Ahlquist and his team captured the shed cells in the stool and developed what he calls “sort of a fecal Pap smear.” They later refined the test by accurately measuring signature DNA changes from these shed tumor cells.

Collaboration for next steps

Mayo Clinic Ventures licensed the technology to Exact Sciences, which, working with Ahlquist, further fine-tuned the technology. Ahlquist serves as a scientific advisor to the company and speaks to officials there on a weekly basis about co-development of future products.

“We had an opportunity to help build Exact Sciences with excellent people around this idea, focusing completely on this single product and doing it right,” he says. “It’s been a great collaboration of two cultures that led to a very efficient, multi-centered evaluation study. We got FDA approval with a unanimous vote, which is rare. And Medicare, for the first time ever, did a parallel review with the FDA, so we were able to get not only FDA approval but Medicare approval on the same day. This all relates to how carefully and robustly Exact Sciences pursued development. No shortcuts and highest quality of science results in having a very good product.”

​Taking the guesswork out of neurotropic drug selection